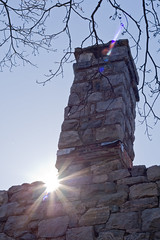 If you know where to look for them, there are a lot of cool trails to be hiked in the Northern NJ area. It’s not all just what you see on painfully overrated cable TV shows around here, you know. There are some great parks, nature trails, and scenic vistas. (Though, yeah, most of them include some high spot from which you can see the New York City skyline. I’m a sucker for that, too.)

Last weekend, I went to the Ramapo Mountains area and hiked my way to the ruins of the Van Slyke Castle. You can read the whole story behind it here, but I’ll give you the shorter one now: A mansion was built nearly 100 years ago. When the family fell apart 50 years later, the house was abandoned. In 1959, vandals burnt it down. Later on, the land it was on became part of a protected nature hiking area, surrounding Ramapo Lake.

The trail actually wraps right around the castle. These aren’t ruins that you’re not supposed to go visit. This isn’t off the beaten path at all. You walk right by it and almost through it. In fact, most people do walk into it and through it. It’s an interesting place to visit. Remarkably enough, some tile work is still there in the ground. 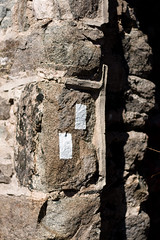 A lot of the house still exists. The stone walls are all still mostly there, along with now-exposed iron I-bars to keep things in place. The pool, though empty, is in the back, though overrun with trees and plumbing that leads nowhere. You can get hints of what the place must have looked like back in the day, but it’s tough to piece it all together.

It’s also a bear to photograph. The area surrounding the castle has grown freely in the last 50 years. Besides one overlook point that’s made up of boulders and rock and faces out over the Lake and surrounding mountains, most of the castle is surrounded by weeds and trees. You can’t walk 50 feet away and take in the whole thing. You aren’t going to get one perfect shot of the entire castle from any angle.

Photographing this thing with anything other than a super wide lens is almost silly. Yet, there I was, 50mm in hand, trying to pick out some details that might tell the story.

You can see them in my Flickr feed now. I’ve included a couple in this blog post. There’s even a self-portrait I took at the ruins with the help of my new remote control for the camera. Good stuff!

Have a great weeekend, everyone!