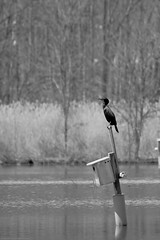 The new Canon XSi camera is now in stock at several major retailers.  This can only mean one thing: The Canon 17-55mm IS lens will be in stock, too.  Let me recap:

As you may remember, the refurbished Canon 28-135mm IS lens I bought when I got my Canon XTi on January 24th never worked right.  The autofocus was iffy, at best.  I finally returned it to Adorama last week and got a refund on the purchase price for it.  Props to Adorama, who handled everything so well. Seriously: I called them up.  They e-mailed me a copy of the original purchase receipt.  I packed that up in the box along with the defective lens, mailed it back to them, and got a refund on the purchase price less than a week later.  Combining that with some Amazon points and a few bucks from my PayPal account, I drastically changed my SLR lens set-up.

I wound up buying the 17-35mm lens because the Canon 18-55mm IS lens has been on back order everywhere since it came out a couple of months ago.  I don’t see that changing anytime soon, particularly as the XSi uses it as the kit lens and will no doubt be using up vast quantities of the item.

Or, now that I purchased something else, the lens I wanted in the first place will flood the market.  UGH.  The good news is, the Tamron I bought got very similar ratings to the Canon and even the Sigma lenses I considered.  I don’t think I lost any quality for the photography I’ll be doing.

If I get more serious down the road, I might sell the 70-300mm to go for the 70-200mm f/4L that Canon has for a couple hundred more.  It’s a beautiful lens, but just a little out of my price range at this point. I also wanted to go for the extra 100mm. I’m greedy.  And the IS will help, too.  The L lens doesn’t have IS.  (It does if you want to drop an extra grand on the lens, and that freaks me out.  I’ll get there someday, I’m sure.  I hope.  I need to make money off this before I could justify that expense, though.)

The picture included with this post was taken with the 70-300mm lens at full extension. It’s also my textbook example for why black and white rules. The color picture was very plain.  Converted to black and white with some color adjustements, it really sings.

One thought on “Rethinking the Camera and Lens Arrangement”