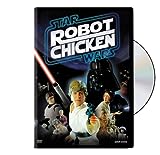 Loved the book. Saw that the movie was advertised as “inspired by” the book, and not directly adapting it.  That sounds like trouble.  Reviewers weren’t terribly kind, as I recall.  The book is great, though.

This is the release of the week.  I’ve only ever seen the first half of the first episode, and have been dying to see more.  Now, you an get the complete series with tons of extras in one boxed set.

These are the people who brought you “Top Fuzz” and “Shaun of the Dead,” people!

Came out just shortly before the “Family Guy” parody.  This one is supposed to be pretty good, though I’ll likely never see it.  Only $10 at Amazon right now.  (Click on the image above.)

Next week is a HUGE week: Freakazoid and Tiny Toons.  They’re one of the last few things I’ve been waiting for on DVD since the birth of the format. Most everything else has come out already.