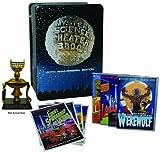 Brendon Frasier and some kids have a kid friendly sci-fi adventure.  And now you can see it at home in 3-D — cardboard glasses included, of course!  As if that’s not enough, you can also get “The Polar Express” in 3-D these days.  I just learned that in the Best Buy circular.

This is the 2-DVD/2-CD set of Elton John’s Las Vegas spectacle show. That includes a making of documentary as well as the full concert in both audio and video.

Not a DVD, granted, but check that subject header again.  I never mentioned “DVD.” ;-)  I so want to buy this (even if only the game only edition), just so I can download and play “Jessie’s Girl.”